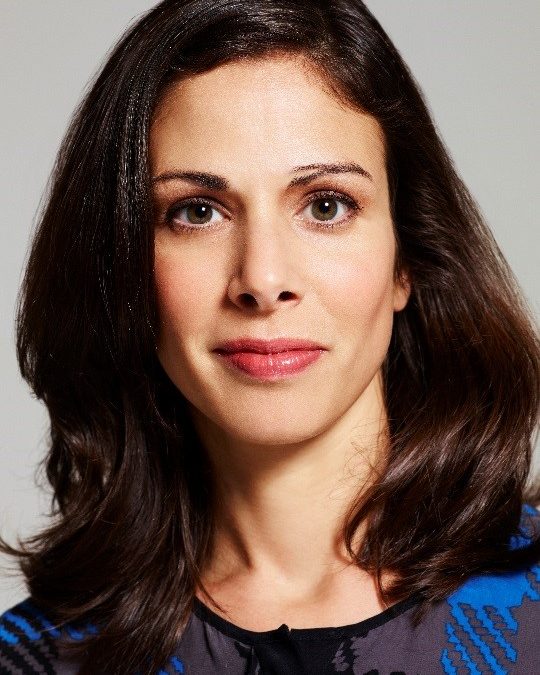 The 17th edition of “Prix des Technologies Numériques” (PTN) of Telecom Paristech will be taking place at Cité Internationale Universitaire of Paris, next 22nd of June. This year, the Jury has decided to select the subject of “Collaborative Economy” as the focus of its selections. This is in this context that Vincent Pilloy, the CEO of Inov360 and PTN jury member, has prepared a special feature for the Telecom magazine that will be distributed on the same day as the prize. For that purpose, Vincent Pilloy has interviewed Rachel Bostman, a global expert on Collaborative Economy, and we are happy to share this interview with you, as a preview, on our blog.

Rachel Bostman is a global thought leader on collaboration and sharing using digital technologies to transform the way we live, work and consume. She has inspired a new consumer economy with her influential book « What’s Mine is Yours: How Collaborative Consumption Is Changing The Way We Live ». She is a World Economic Forum Young Global Leader, was named by Fast Company as one of the ’Most Creative People in Business’ and featured by Monocle as one of the top 20 speakers in the world to have at your conference. Her writings and research have featured in the Harvard Business Review, The Economist, CNN, New York Times, The Guardian, The Financial Times, and many other publications. She is currently designing the first-ever MBA course on the collaborative economy that she will teach at Oxford University in 2015.

« A shift from centralized, top-down organization to distributed networks and marketplaces »

Vincent Pilloy : How do you define « collaborative economy» ? What are its key characteristics ?

Rachel Bostman : I define the collaborative economy as a system that activates the untapped value of all kinds of assets from spaces to skills to stuff through collaborative models and marketplaces that enable greater efficiency and access. e values that underpin this economic principle are empowerment, humanness, openness and simplicity. For example, Coursera takes the untapped value of the knowledge that happens in universities and creates greater access through online models. Airbnb takes the untapped value of underutilized space whether that is a spare room, holiday home or treehouse, and enables people to access local spaces. And so on…

Many models in the collaborative economy are peer-to-peer (P2P) in that they match ’needs’ and ’wants’ directly. For example, I need an errand to be done, someone can run that errand. However, p2p is just one category under the bigger collaborative economy umbrella. Now we can find many more B2B, and B2C examples in different sectors including healthcare, finance, crowdfunding, education and more. The key model you see in the collaborative economy is a shift from centralized, top-down organizations to distributed networks and marketplaces. In short, people are bypassing traditional organizations to exchange directly with one another. 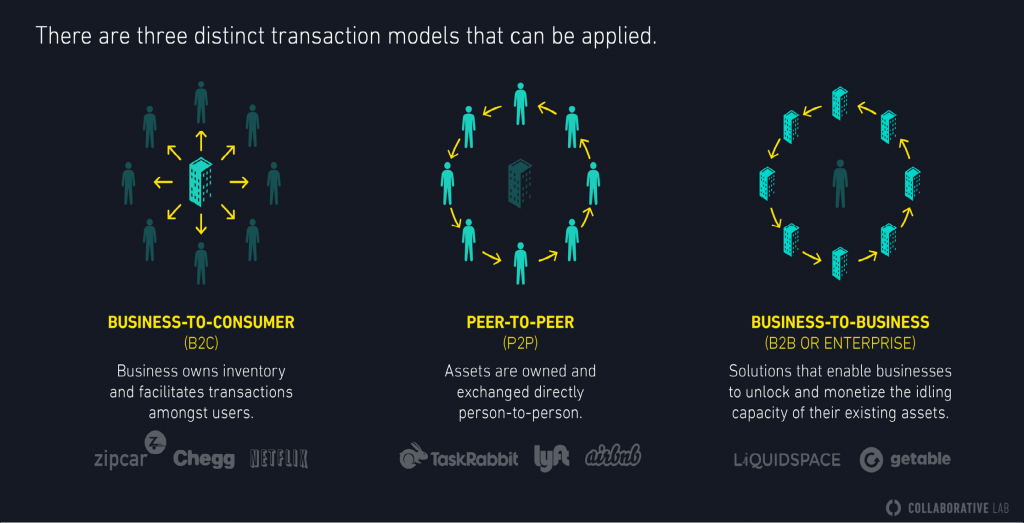 Transaction models of the collaborative economy

V.P. : As a thorough observer of the collaborative economy, what are the way to measure its importance and progression in the global economy ?

R.B. : Company valuation is probably the most accurate indicator that you can rely on right now to estimate the size of the collaborative economy. Start-ups like Lending Club, Uber, and Airbnb have multi-billion dollar valuations. So, the market is big and it is getting bigger. To get a better idea of the potential of the collaborative economy, let us look at individual examples. It took Hilton Hotels 93 years to build an inventory of over 600,000 rooms; Airbnb got there in just 4 years, and they now have 1 million rooms. More importantly, they are at a point from where they can scale up incredibly fast. Another interesting example is BlaBlaCar, which is a true ride-sharing platform. They now transport more than 2 million people every month, which is more than the Eurostar.

V.P. : Is this a global trend ? Can you observe differences between markets or geographies, in the way it is accepted by consumers or applied by entrepreneurs ?

R.B. : Certain regions and cities have emerged as frontrunners and are becoming the global examples for the space. Below is an overview of regional activity and progress.

While North American countries did not necessarily pioneer the earliest Collaborative Economy examples, the US has produced the most globally significant companies to date and driven the awareness and regulatory reform agenda over the last four years. Cities in Canada have become more active recently.

Many collaborative economy verticals have had their roots in Europe, especially collaborative mobility such as BlaBlaCar and BMW DriveNow, and the ecosystem is strong generally, though focused around the UK and Western Europe, with emerging pockets in Central and Eastern Europe over the last two years.

Certain countries in Latin America have shown great interest and enthusiasm for the Collaborative Economy from very early on, especially in Brazil, Colombia and Argentina, however given the size of these markets, uptake has been minimal and growth has been marginal, despite the potential of these models here. There have been multiple consumer studies in 2014, view this post(1) for the summary of findings.

V.P. : What are the industries or activities mainly concerned by « collaborative economy » ? Do you think it will grow to more industries soon ?

R.B. : Financial services without a doubt, because if you think of the five drivers that collaborative start-ups typically innovate around – waste, complexity, redundancy, broken trust and limited access – they are rife across financial services. Examples of collaborative finance companies are Zopa (Social Lending), Kickstarter (Crowdfunding) and Transferwise (P2P Currency Transfer).

Healthcare is another – there may be very little activity in this sector at present, but we will see a lot of it over the next couple of years. Examples like Cohealo are interesting.

The utilities sector also has a lot of potential. For example, there is an interesting platform called Vandebron based in the Netherlands that connects renewable energy providers directly with customers. For example, one wind turbine can power about two hundred households – think of a scenario where customers and providers can find one another and form contracts in less than five minutes. It is a peer-to-peer marketplace and a classic case of disintermediation.

These are highly regulated industries, but this is where I think there will be shifts in the business model, and established brands will start to do interesting things that could be difficult for start-ups to achieve.

R.B. : We are digitising identity and reputation and this will fundamentally transform whom and how we trust. Yes, we currently have ‚digital footprints’ but think about your online identity. You might have a Linked In and Twitter profile, a Facebook page, and might have an Airbnb review history. They all live in different places. Yeah sure, you can get background information by searching Google but it’s tricky to get a coherent picture of who that person really is and what other people really think of them in different contexts.

V.P. : Some people are questioning the reality of « collaborative economy » as a new social trend between people, as big players seems to be driven by profit mainly, independently of social concerns? Do you see differences between different approaches ?

R.B. : It’s a difficult tension to manage. The companies need scale and achieve a critical mass of both supply and demand to be able to offer the convenience and choice that makes them attractive to more people. At the same time, they face a challenge in maintaining the values, secret sauce and sense of smallness within bigness that made them different and compelling in the first place. It can be done and much of it comes down to the culture the founders set and then nurture. Local offices that get local differences are also important.

In the case of Airbnb, from what I have seen and experienced from their employees, I do believe they think like a village. They are continually trying to figure out how to retain the humanness in the company. I believe ‘love’ is one of their core strategic pillars. Not many companies have that as a goal. In the case of Uber however, they are far removed from values. Scale is definitely something that can give a company immunity whether it’s regulation that can ban them out of existence or a well-funded copycat competitor. It’s basis for business to grow but one of the things I have seen is that when the goal for the entrepreneur becomes fast growth, things go wrong. It is easy to lose sight of why they started the business and what people value from them. Here is a heart to most successful collaborative marketplaces that lies in their community.

In collaborative marketplaces, it can be easy to forget the people that generate your business. Size should not dilute their participation but grow it. In short, size matters and I hope we see companies with different organization cultures and structures that can find a new balance between being global and feeling local.

To know more on Rachel Bostman and her work : http://rachelbotsman.com/

To know more on « Prix des Technologies Numériques 2015 », and to discover the players of Collaborative Economy selected for this 17th edition of this event, please check the dedicated website: