Who will benefit from the parking reform in France ?

Low parking fee payment rate (around 35%), €17 unique penalty incompatibility, or even an expensive fines recovering management, here are some dysfunctions the France on-street parking reform intends to adjust. But the chosen options for
this reform, which will come into force in January 2016, will expose stakeholders to a complex implementation.

The liberty to come and go: a right protected by the French Constitution, to which citizens are attached. Is it one of the reasons that bring French motorists to be amongst the black sheeps concerning on-street parking payment? Barely more than one third pays spontaneously the fee for public area occupancy, whereas rates exceed 70 or even 80 in other neighbor European countries.

But this situation isn’t only due to a feeling of « free » space; we also need to consider the low risk to be fined and, most of all, the ratio not very discouraging between the hourly cost and the flat-fee fine (€17 since 2011, after being maintained at €11 for 25 years). 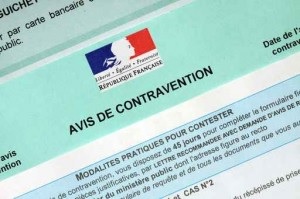 For all that, local realities are contrasted. With an hourly rate that can vary from 1 to 7 between the cities, and a rate from 1 to 3 between the average national cost and the maximum cost in Paris, inequalities are obvious. Direct consequences of the flexibility between supply and demand! 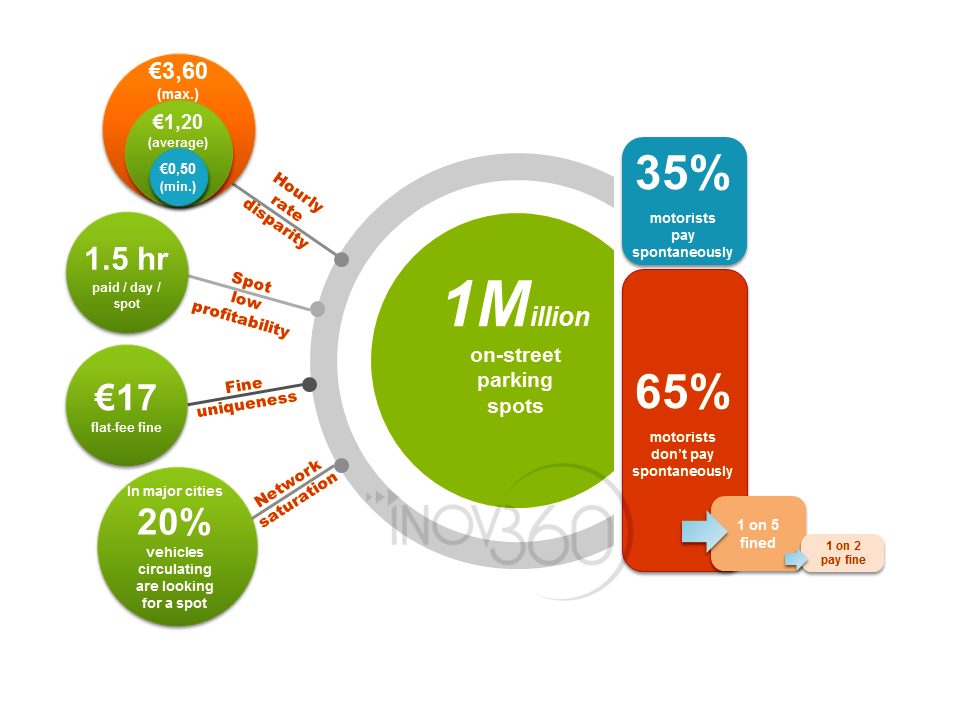 From then on, beyond the lack of public spirit, there is above all a loss of balance between localities, since the fine remains flat-fee on the entire national territory. A simple calculation of the ratio between the €17 fine and the number of parking hours it corresponds confirms the imbalance:

©Inov360 – What parking duration is equivalent to the actual flat-fee fine?

Local Authorities to take over the helm

To find a solution to this payment default, while finding a new balance between infraction and penalty, the legislator has thus decided to get the public parking out of the legal framework. This decriminalization, a not very explicit legal term for many motorists, actually transforms the public roads’ occupancy right into a usage-fee. As a result, it’s locally that the attributable cost to a lack of respect will be fixed.

The reform doesn’t only aim at increasing the parking payment rate: it targets to bring a lever to mayors in their local mobility policy. Sure, the local authorities “allowances” will be able to see a clear benefit to this new operation scheme, but it is also the occasion to encourage a better turnover of vehicles. Indeed, the new law designs a framework that predicts that post-parking cost (term kept in case of an initial lack of payment because the change of legal framework doesn’t allow talking about fine anymore) might reach the total cost of a day parking; meaning €36 for example in Paris, if the current rate scales are maintained. Enough to make you think twice when parking your vehicle without paying.

Answers that still remain to be found

But this principle, simple by all appearances, arises more questions than it brings answers.

–  If we exclude the case of a few big conurbations (Paris, Lyon, Bordeaux, Montpellier…), the current hourly costs entail a post-parking cost lower than the €17 flat-fee fine. It is a consequence of the balancing wanted and mentioned before. But in the several cities where the amount of the post-parking flat rate would be at €5 or €8, wouldn’t the new law have the opposite effect of the one expected? Will we still have interest in paying a priori? Aren’t we going towards a transposition of what we notice today in the municipalities where the ratio between cost and fine is not very motivating?

–  To counter this risk, will the elected representatives dare to revise the current costs upwards? The question remains open.

–  The new management of the service will imply the development of tools and digital services. First of all, the expansion of the dematerialized payment tools (applications on mobile phones, NFC,…), or even the deployment’s speeding up of electronic devices noting violation (from the used terminal by sworn in agents with automated control means, like the direct reading of license plates by moving vehicles) ; also, we need to provide means to determine and pay the remaining due differential between the post-parking flat rate and a possible part payment of parking fee… As many scenarios to cover than users and technological evolutions of all forms as well as investment and running costs that can be difficult to apprehend and to put into action for some local authorities.

–  A violation report could from now on be done by the municipality, but also by a private delegatee with reservations that those agents are sworn in. A new organization to put into place, but also the duty to prepare ourselves to handle reclamations or even litigations.

–  And globally more, there will be a need to guide the accompanying of the change with the users, to inform them clearly with the new rules. For the regulars, as well as for the occasional ones, because henceforth the exposed risk will be different every time we will exceed a city border. A source of conflicts and contestations facing the authorities if respect of obligation to inform the user is questionable…

So, who will benefit from the public parking reform in France? The users? The local authorities? The solutions’ providers? The operators? Ideally everyone, if we want to be able to assure that it is a successful innovation.

Those are reflexions that Inov360 are offering to share with you over the upcoming months in order to ensure the best establishment of the reform.